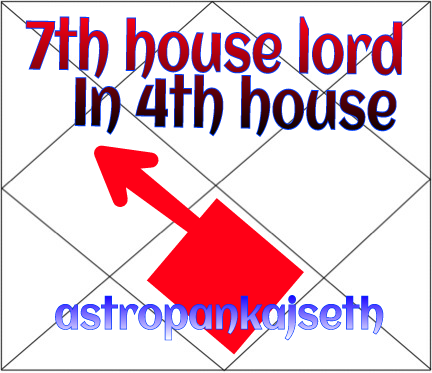 7) If 7th lord in 4th house in bad influence then native may be suffering from marriage happiness.

8) 4th house belong to mother and 7th house is marak for native so it may cause marak for mother if in bad influence. So may be dispute with mother or health or lifespan problems for mother. In same manner it may also cause trouble from vehicle depending on planet significant.

When 7th house lord is placed in 4th house, then his wife is not under control of Native. Native is always truthful. He is intelegent. He is religious. He may be suffering from disease related to teeth.

If 7th house lord is placed in 4th house then Native will be fickle minded or sensual. He may has enemity with his father. He doesn’t has any affliction. His father may be harsh speaker. His father is take care by his wife.