1)Before knowing the effect of 6th house lord in 5th house we have to know about Sixth house and Fifth house. As 6th house lord is placed 12th from own house you may read this First house lord in 12th house.
2)6th lord in 5th house is not considered auspicious for the native because it’s indicating native may have face problems in this life due to his past life deeds. Or in simple native may facing problems to obtaining fruits of past life good deeds. 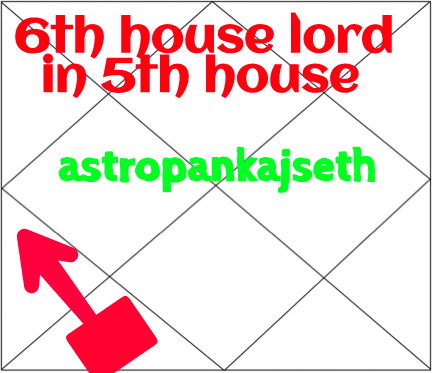 3)5th house belong to children and 6th house is belong to enemy, disease, dispute etc. So 6th lord in 5th house is indicating native’s children may be suffering from health problems. Native’s children may be weak in
physical strength. If there is chain of indication in all family members chart then it may be considered Pitru Dosh. So due to this native may have disease from birth or this may continue pass in all generations.
Other wise 5th lord in 6th house is not well placed then it is indicating native children may be dead because 6th lord is also Marakesh for 5th house regarding children.
4)5th house belong mentality and 6th house belong to quarrel or fighting or argument so 6th lord in 5th house native may quarrelsome or argumentive in behavior. If 6th lord is well placed in 5th house then native is very intelligent in argument and having good judgment ability.
If 6th lord in not well placed then native has low intelligence. Native doesn’t able to doing right decision. It may also possible Native’s inclination regarding physical workout in place of mental work out. Means one who are involved in any work without thinking.

8)When 6th lord with 5th lord in 5th house it may indicating native may have dispute with his children and father. Native may have suffering from dishappiness from government officers. Native children or native own self suffering from disease. Native doesn’t have good mentality. He may not successful in his Sadhna (Mental progress regarding religion or spiritual matters).

When 6th house lord is placed in 5th house, Native has unstable financial condition. He may be liberal. He may be pleasant in nature. He may be happy. He may be very clever regarding own work.

One thought on “Sixth House Lord In Fifth House”