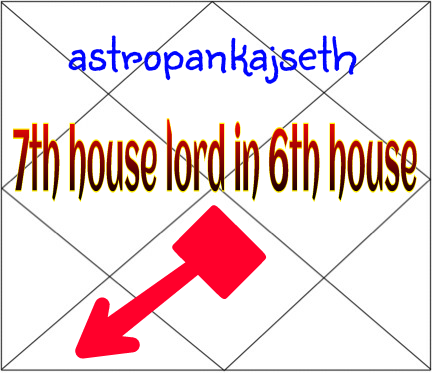 3)7th house belong to wife and it is placed in 12th from own house so it may cause wife’s physical constitution may be weak. It may also cause native’s wife may be from out cast or from forigen country or follow forigen cultures which is not belong to native. Native’s wife may be suffering from disease or may be admitted to hospital. If 7th lord is affiliated and weak in strength then it may be cause death of wife.
4)Native may be faces separation or divorce from wife. If 7th lord has good strength then it may cause two marriage and both wife will be survive.

8) 6th house belong to loan and 7th house belong to profession ( as 10th from 10th house) so 7th lord in 6th may cause native may be suffering from loan regarding his profession.
9) When 7th house lord with 6th house in 6th house then it is not consider good as combination of lord of dusthan with marakesh because marakesh gets strength regarding his marak power in the horoscope. It may cause marak for wife, native, and mama of native depending on horoscope and Dasha. Native may facing legal or loan problems from wife or business profession. Native may be cheated by others or may be suffering from thief.

When 7th house lord is going to 6th house, his wife will be sick. If not sick then he has enemity with his wife. He may be angry by nature and without any sort of happiness.

When 7th house lord in 6th house, his wife may be sick. He may has enemity with his wife. He may be weak in front of women. If 7th house lord is cruel then it may be marak.