2) According to Brihat Parasar Hora Shastra

When 12th house lord is placed in 9th house native will have jealousy with his guru and also has enmity with his friends. Native always inclined towards fulfillment of self-interest. 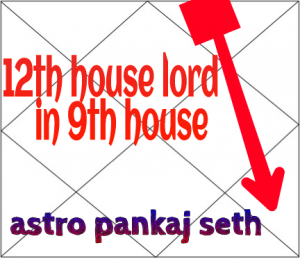 4) 9th house is belong to luck and 12th house is belong to expenses so its may be indication of expense of luck. My means native doesn’t be able to use his opportunities or not able to utilize his luck. If badly affiliated then native may be devoid from any fortune (its also depending on strength of 9th house lord). 12th house also belong to foreign place so it may be indicating native may be fortunate at foreign place or his fortune comes from foreign land.

7) 9th and 12th both houses are Travel house so 12th house lord in 9th house may cause of any foreign travel. Native may has inclination towards visiting religious place. Native may do expense on charitable deeds( परोपकारी).

8)12th house belong to bed pleasure so 12th house lord in 9th house is indicating native may be fortunate regarding bed pleasure. But it may also cause health problems to the native.

9) When 12th house lord with 9th house lord in 9th house then results may depending on horoscope status.
If combination is well placed then native is very spiritual and religious person. Native may do a lot’s charitable deeds. Native may be visiting religious place. Native’s father may has a lot’s  of convinces. Native himself enjoying a luxurious life.
If combination is affiliated then native doesn’t has a good marriage life. Native losses his jobs and don’t have a good fortune.

10) If you want to know about the effect of Planet in 9th house you may click the link.