2) According to Brihat Parasar Hora Shastra

When 11th house lord is goes to 5th house native’s children will be happy. They (children) may also be educated and virtuous or having good morality. Native own self will be inclined toward religion and will be happy.

When 11th house lord goes to 5th house, native and his father both are very attached to each other. Both father and son are skillful and equal in qualities. His child will be long lived. 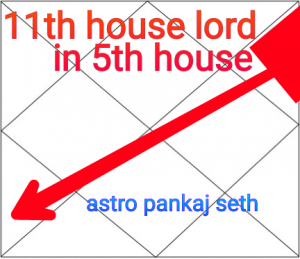 3)11th house lord in 5th house is placed just 7th from own house which is making samsaptak relationship which is not consider good. But lord of labha sthan place in most auspicious house which is belong to past life good deeds. So native may be progress in both prosperity and spirituality matters. It’s also a good dhan making combination in horoscope.

6) 11th house lord in 5th house is indicating native may be gets good wealth and profit in his life. Native may also successful in his life regarding materialistic happiness.

7)5th house also belong to speculation so 11th house lord in 5th house is indicating profits through speculation. So native may be earn through stock market, investment, gambling or other such type of activity.

9) If you want to know about effect of Planet in 5th house then click this link.